The investigation into Hunter Biden is more extensive than indicated in a statement he issued this week, according to multiple reports that say that federal prosecutors are scrutinizing Biden’s foreign business deals, including with one of China’s largest energy companies.

One area of focus is Biden’s financial relationship with CEFC China Energy, a major energy holding company whose chairman is believed to have ties to the communist party.

Emails, text messages and financial documents show that CEFC wired $6 million to bank accounts and firms controlled by Biden in 2017 and 2018.

Some of the transactions were flagged for possible criminal activity, according to a report that Senate Republicans released in September. A $3.5 million wire transfer from a Russian billionaire to a firm linked to Biden in February 2014 was also flagged by bank regulators for suspicious activity, the report said.

Biden released a statement on Wednesday through his father’s presidential transition team saying that the U.S. Attorney’s office in Delaware had contacted his legal team to say his “tax affairs” were under investigation.

A source familiar with the probe told the Daily Caller News Foundation that the investigation started in 2018, months before Joe Biden launched his presidential campaign. Attorney General William Barr learned of the investigation earlier this year but kept it from spilling into public view because of the sensitivity of the election.

The source said that the fact that prosecutors have reached out to Biden suggests that the investigation has moved into an “overt” stage.

Politico and CNN reported that prosecutors are also looking beyond tax crimes into possible money laundering activity and Biden’s other foreign business deals.

There were some indications before the election that the FBI was focusing on potential money laundering. Fox News reported that federal prosecutors issued a subpoena for Biden’s laptop in December 2019, with notations that suggested a money-laundering probe was underway.

Fox News reported on Wednesday that the investigation is based in part on Suspicious Activity Reports filed with the Treasury Department regarding Biden’s financial activities. The Senate report regarding Biden’s business deals also relied on SARs, a source familiar with the matter has told the DCNF.

Sinclair Broadcasting reported in October that the Justice Department had opened an investigation into Biden and his associates.

Biden has also come under scrutiny over his position as a director for Burisma Holdings, a Ukrainian energy company whose owner has been the target of bribery investigations in the U.K.

The Senate report showed that Biden’s relationship with CEFC was far more lucrative for him than previously known.

The report said that an affiliate of CEFC wired $5 million on Aug. 8, 2017, to a bank account for Hudson West III, a shell company that had Biden as a co-owner.

Prosecutors revealed during that case that the FBI obtained a warrant under the Foreign Intelligence Surveillance Act (FISA) against Ho based on suspicions that he was working as a covert foreign agent.

Ho was convicted on the charges and served 30 months in prison. It is not entirely clear what work Biden did for the $5 million in payments from CEFC.

He first began discussing forming a partnership that involved CEFC in early 2017. Biden and a group of businessmen began in early 2017 exploring an investment deal with CEFC.

The would-be partnership involved Tony Bobulinksi, a California-based businessman who has since released a trove of records detailing the effort to strike a deal with CEFC.

The partners formed a company called SinoHawk with an initial plan to obtain $10 million in seed money from CEFC to pursue investments in the U.S. and other countries.

According to one document, CEFC provided a $5 million interest-free loan to the Bidens.

“This $5 MM loan to BD family is interest-free. But if the $5 MM is used up, should CEFC keep lending more to the family? If CEFC lends more, they need to know the interest rate for the subsequent loan(s),” the company wrote to Bobulinski on Aug. 1, 2017.

Hunter Biden appeared to acknowledge in a text message to Bobulinski that the partnership with CEFC could potentially run afoul of U.S. laws regarding business dealings with foreign entities.

Biden wrote that he wanted the group to avoid having to file as foreign agents. He also made reference to the Foreign Corrupt Practices Act, or FCPA.

“We don’t want to have to register as foreign agents under the FCPA which is much more expansive than people who should know choose not to know,” Hunter Biden wrote to Bobulinski on May 1, 2017, according to a message obtained by the DCNF.

“No matter what it will need to be a US company at some level in order for us to make bids on federal and state funded projects.”

Biden arranged a meeting for Bobulinski and his father in Los Angeles several days later. Bobulinski has said in interviews that he discussed the Bidens’ plans for business in China during the meeting.

Biden ended up cutting Bobulinski out of the deal.

Bobulinksi sent emails to CEFC executives on Aug. 2, 2017, regarding the potential deal. Days later, CEFC began the first installment of what would end up being $5 million in wire transfers to firms controlled by Biden.

Bobulinski released a trove of emails, text messages and other documents from the CEFC deal in October. He said he came forward because of revelations from the Senate report, as well as to rebut Joe Biden’s denials that he was not aware of his son’s business activities.

Biden disclosed some of his interactions with CEFC China Energy Chairman Ye Jianming in a profile published by The New Yorker in July 2019. Biden said that Ye gave him a diamond during a meeting in Miami.

A longtime Biden business partner discussed efforts in early 2014 to obtain a U.S. banking account for Baturina, whose late husband was the mayor of Moscow until 2010.

“Establish US banking relationship was the goal she gave me,” Devon Archer, the Biden associate, wrote of Baturina in a Jan. 5, 2014, email obtained by the Daily Caller News Foundation.

According to the Senate report, Baturina wired $3.5 million on Feb. 14, 2014, to a company controlled by Biden and Archer.

“These transactions were identified because of Baturina’s reported criminal activity,” the Senate report states.

An associate of Archer’s named Jason Galanis, who worked with him to secure Baturina’s account, wrote in an email that they had successfully “weaseled” a JPMorgan bank account for the billionaire.

Galanis’ father, John, who was indicted along with Archer and his son in a separate fraud scheme in 2018, wrote in a court filing that Biden and Archer made “made numerous attempts to avoid sanctions” on Baturina’s behalf.

Reports from CNN and Politico suggest that Biden’s dealings in China have been the main focus of the federal investigation.

Other messages from the Bobulinski trove show that Biden spoke with Ye about a deal between CEFC and Rosneft, the Russian energy giant. 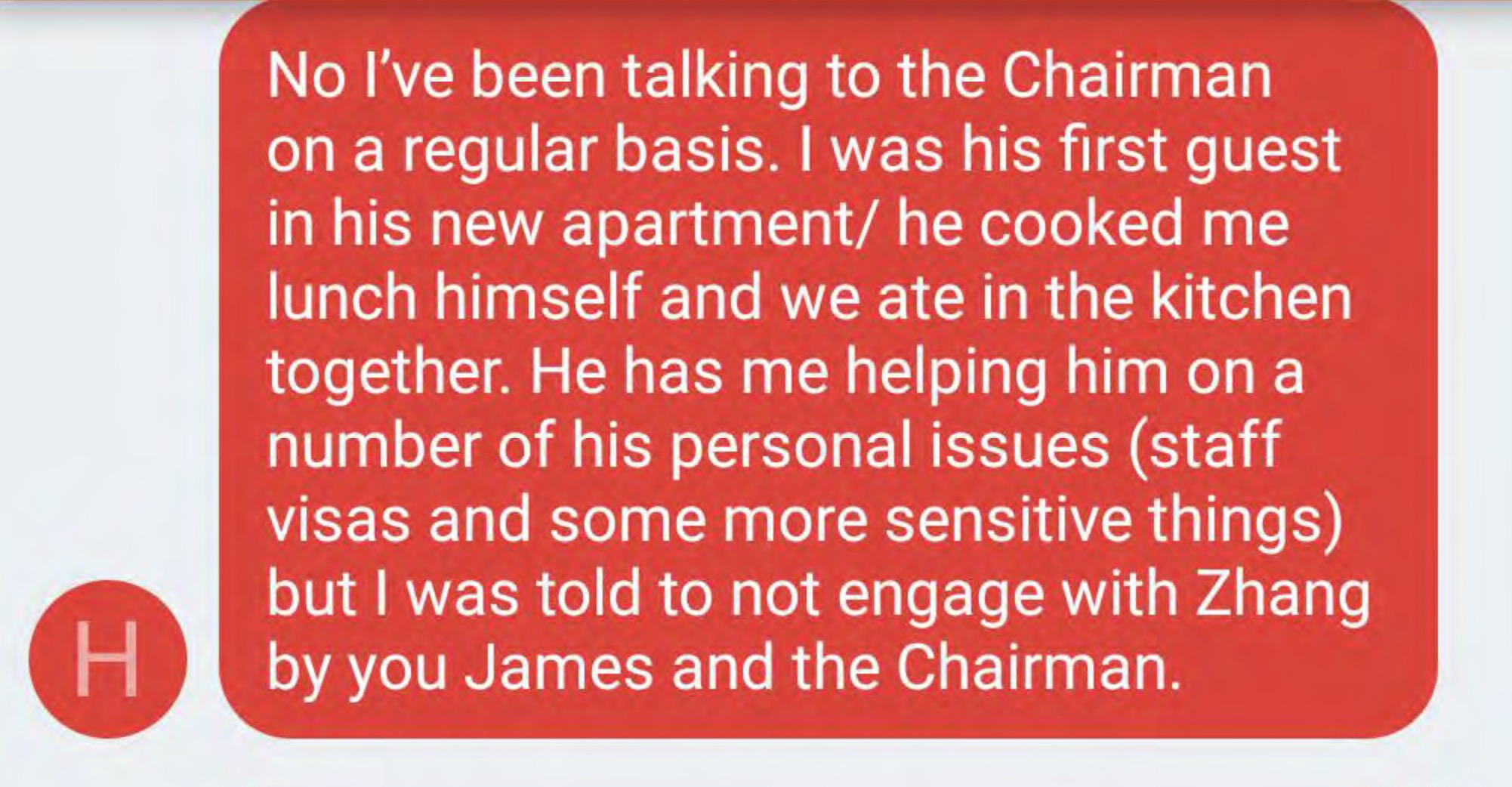 “He and I discussed the Roseneft (sic) deal and he is pissed off but only by the execution which I guess was Zhang’s deal,” Biden wrote to Bobulinski in a text message in October 2017 that was included in a supplement to the Senate Republican report.

Biden also said that he spoke to Ye “on a regular basis” and that he was the “first guest” in Ye’s apartment.

The oil deal was seen as strengthening ties between Russia and China and would have been one of China’s largest investments in Russia, Reuters reported at the time. It fell through months later after Ye was arrested by Chinese authorities as part of an unspecified investigation.

Biden’s inside knowledge about the CEFC-Rosneft deal marks an ironic twist given allegations early in the Trump presidency that a Trump campaign aide was offered a bribe by Rosneft’s CEO in order to cancel U.S. sanctions against the oil conglomerate.

The infamous Steele dossier, which the FBI used in its investigation of the Trump campaign, alleged that Rosneft CEO Igor Sechin offered then-Trump aide Carter Page a bribe in July 2016 in exchange for help relaxing U.S. sanctions against Russia.

Page vehemently denied ever meeting Sechin or discussing a bribe. Other aspects of the dossier have been debunked.