KSTP reports that a University of Minnesota student is seeking to add education advocates for mental health treatment at the campus’s fraternities and sororities.  But the news item also contains a shocking statistic, that University Doctors saw more than 19,000 students for mental health issues last year.  Dr. Gary Christensen, Chief Medical Officer of the University’s Boynton Student Health Services, told KSTP that one in three University students have been diagnosed with some sort of mental health disorder, mostly depression and anxiety.  Christensen says its the top public health issue on campus.

The U of M was recently named a leading healthy campus in the U.S. which recognized its student mental health website and its Provost’s Committee on Student Mental Health.  The committee was formed in 2005 after reviewing findings from a federally-funded study called “The Needs Assessment Project: Exploring Barriers and Opportunities for College Students with Psychiatric Disabilities.”

Boynton Health Service has a separate mental health clinic which employs 23 health care professionals, including four M.D.’s.  In comparison, its women’s clinic only employs three, including one M.D, and its eye clinic, four with no M.D.’s.  According to the KSTP story,  “approximately 9 percent of full-time students use their mental health services.”

The University has multiple resources on campus to help students deal with their mental health issues including a a PAWS program where students can play with therapy animals at various campus locations including a “therapy chicken” named Woodstock.  The U hosted a “Cirque De-Stress” event in October complete with jugglers and clowns where Dr. Christensen served as the ringmaster

The U’s mental health website offers a confidential online mental health screenings to students which are offered during Freshman orientation according to the test.  You can take the quick test by clicking on the image below. 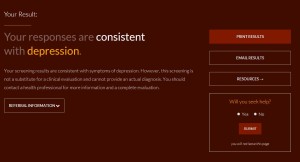 Student government is pushing to have tuition dollars be used for more mental health resources according to the Minnesota Daily.