Social media activist Shaun King in a Tuesday tweet vowed that he would indiscriminately name police officers of the Kenosha, Wisconsin shooting until authorities release the identity of the actual officer who shot Jacob Blake.

“To the Kenosha Police Department, If you do not name the officer who brutally shot Jacob Blake on Sunday, we will simply begin naming officers from your department who may or may not be him,” King wrote. “F–k it. Your protection of his identity is unethical. What’s his name?” 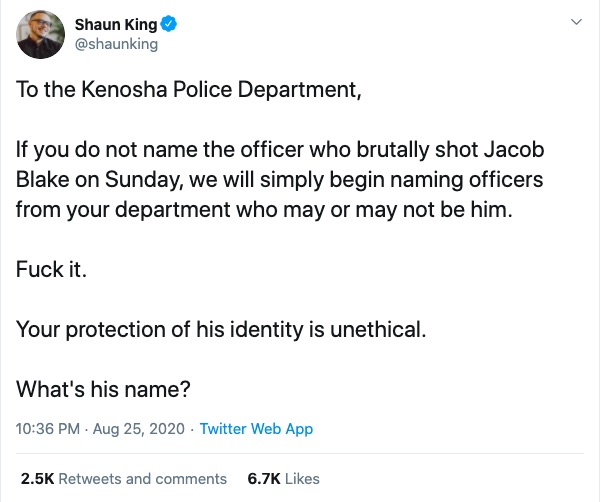 King followed up his remarks by posting the names of two Kenosha Police Department officers and an image of one of them. The activist claimed one of the officers is under protective custody, but his allegation is substantiated only by a text message — the source of which is unknown.

A spokesperson for Twitter on Wednesday morning said “I’ll get back to you” in response to multiple requests from the Daily Caller News Foundation asking whether King’s tweet violated their conduct guidelines, but has not yet provided further information.

A police officer shot Blake in the back multiple times after the man appeared to disobey directives and attempt to enter a vehicle, video showed. The Kenosha Police Department has not released the identity of the officers involved, but multiple officers have been placed on administrative duty, according to a Monday press release from the Wisconsin Department of Justice, which is investigating the incident.

BREAKING: Large protests erupting in Kenosha, Wisconsin, following an incident where police shot a man 7 times in the back; individual is hospitalized in critical condition, reason for the shooting is unknown. pic.twitter.com/Ig5loRpW3U

The Kenosha Police Department and the Wisconsin DOJ have not responded to multiple requests for comment on details of the shooting and the identity of the officer involved.

Civil unrest and riots have followed Blake’s shooting, as local authorities issued the city’s third straight curfew in response to numerous acts of arson and looting, according to TMJ4. The National Guard has also been deployed to quell the violence, the local outlet reported.