Time-lapse: Trump supporters, many of them college students, two hours ahead of rally at University of Wisconsin-Eau Claire. pic.twitter.com/zb6h4AgVXu

With the rally just 90 miles from Minneapolis, many Minnesotans crossed the border in welcoming Trump.  Alpha News caught up with five MN Trump supporters including Minnesota GOP Secretary Barbara Sutter, along with her four friends, Sheri Auclair, Sherry Perra, Mary Rehrer and Holly Olson. They made the trek to join the capacity crowd (3500 venue capacity, with at least 2000 in overflow areas outside) to cheer for the man they believe will be the next President of the United States.

In an interview after the rally, the ladies were bursting with excitement about the event, the crowd and their candidate.  Sheri Auclair said that she had attended another Trump rally prior to the Wisconsin primaries.  She said that it was a great event, but the November 1st rally in Eau Claire was different; that she could feel the excitement of the people around her – “This IS the next President of the United States…it was electrifying!”

When asked about how many Minnesota Trump supporters they thought were at the rally with them, the women said they personally knew of at least 19 carpools of people that had headed across the border to see Trump; and at one point, when Trump asked if there was anyone from Minnesota, “the place just erupted!”

Auclair said that she thinks that the people at the rally demonstrate the broad appeal of Trump: “There were working men and women there, students…” a real cross-section of America in the audience.  She said, “These are people who are looking to Mr. Trump to get them and America out of the quagmire.”

Auclair feels it’s important for voters to see their candidate in person.  “[Trump] spent his time walking us through what is wrong with America, and talked about how he was going to work with Americans to fix the problems. He tells a beautiful story.”

Discussing the state and national polls, Auclair said that she believes the polls are wrong when they give Clinton a lead over Trump.  “The people who aren’t being polled are the ones who are going to come out in force and give Trump the victory next Tuesday.”

The women said that they have met many Trump supporters who will be voting for the first time in their lives in this election.  “This is a movement of people…it is reminiscent of ‘08,” they said when talking about the new voters this year.

Trump has taken a lot of heat and has been accused of alienating and abusing women.  The Minnesota “Trumpkins” told Alpha News that many of the people they have met while supporting Trump are other women.  “And you know what?” Auclair said, “It is predominantly women – small business owners.  Every woman in this group with me today is self-employed.”

There was a small group of protesters also at the rally, held at a distance by barricades from the attendees.  “It looked like most of them were students, maybe not even over the age of 20,” one of the women said without animosity, “but, they haven’t been out in the world, working, caring for a family yet.  They’re in school; their parents are paying their way or they’re getting school paid for by the government or loans…they just don’t know yet about the real world.”

Protesters come out ahead of Donald Trump rally tonight in Eau Claire. pic.twitter.com/TZdVIxXYhq

The latest general election tracking polls are showing a tightening race with Trump leading Hillary by 5.4% in the latest Los Angeles Times/USC Dornsife tracking poll; and tied with Clinton in the ABC News/Washington Post, IBD/TIPP, and Rasmussen polls.

In Minnesota, the latest published poll available was conducted by the Star Tribune prior to the FBI announcement that it is reopening its investigation of Clinton’s emails.  The poll released October 24 by the Tribune had Trump 8 points behind Clinton; however, Minnesota high school students, in a mock election held this week, have “elected” Trump by a narrow margin over Hillary Clinton.  The poll information leaves it as anybody’s guess as to which candidate will win in the historically blue state, but according to the “Trumpkins” from Minnesota, “Trump is going to win and it will be big…God bless America!” they exclaimed. 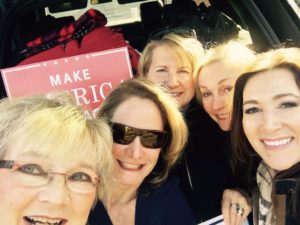