A local sheriff was called on a Lynd, Minnesota, restaurant owner last week because she remained open after one of her licenses was suspended for violating the governor’s coronavirus mandates.

Southwest Health and Human Services (SWHHS) sent a letter Wednesday to Larvita McFarquhar, owner of Haven’s Garden, informing her that her food service license had been suspended because she opened her restaurant for in-person service.

The letter said an SWHHS employee “observed approximately 80 to 100 people consuming food and beverages inside Haven’s Garden” during an open mic-night over the Thanksgiving weekend.

The health agency told McFarquhar that she could face fines and jail time for operating her restaurant during a license suspension.

But she still didn’t close her doors, so the Lyon County Sheriff’s Office was called to investigate.

The responding officer said the sheriff’s office “got a complaint on it” so he was “coming to investigate the complaint.”

McFarquhar asked the officer if it is the responsibility of the sheriff’s office to investigate complaints involving a food service license.

“I’m just coming to confirm to see if it happened and then letting them know if it is,” he said.

“Do you guys always take care of this kind of complaint?” asked McFarquhar.

McFarquhar has been threatened with thousands of dollars in fines, up to a year in jail and a lawsuit by Attorney General Keith Ellison, Alpha News reported.

She joined “Fox & Friends” Sunday morning to discuss the situation and vowed to “keep fighting.” 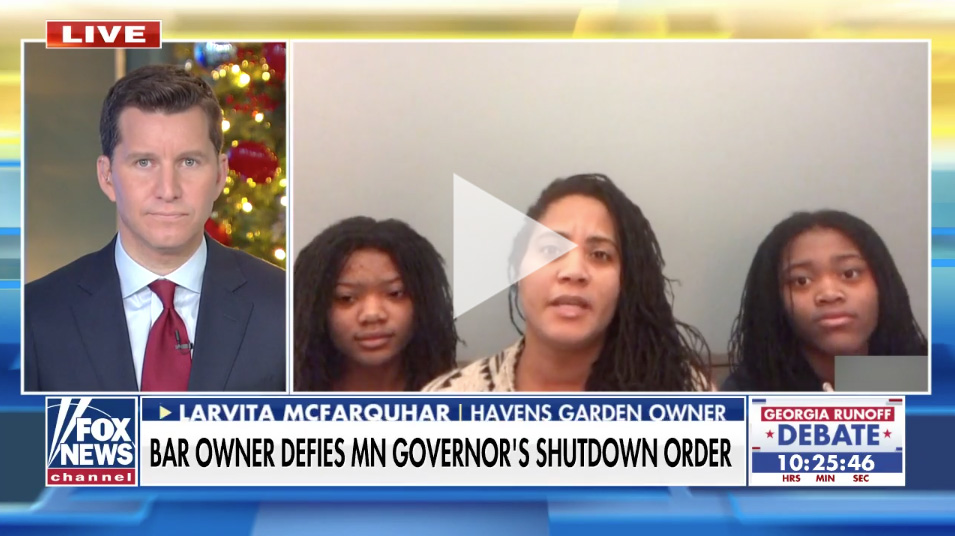